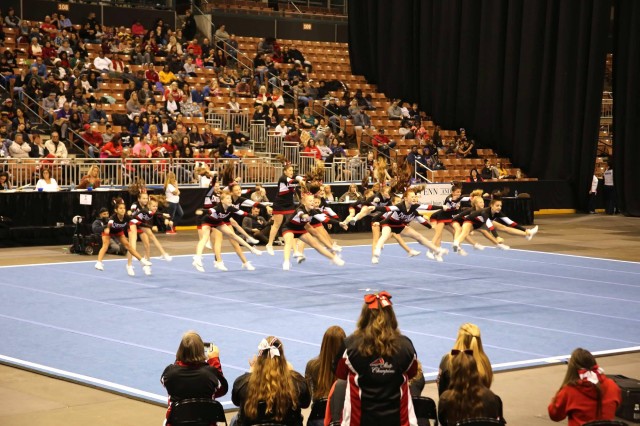 Performing all arm motions in front of a mirror will help cheerleaders to perfect their arm placement.

All arm motions should be performed with tight straight wrists

Horizontal: A straight line from left to right where both ends are at the same level.

Vertical : A straight line up and down.

Bring both arms above the head. Keep both hands in fists, making sure that your thumbs stay outside of the fist and not inside of the fist. Your knuckles should be pointed vertical, toward the sky and the insides of your elbows should be touching the sides of your head. Make sure to keep your arms straight. This movement should look like two parallel lines stretching vertically from your shoulders.

Bring each arm down 45 degrees from the Touchdown, so that they form a V shape. Your hands should still be in fists. Be careful not to let your elbows bow out. Keep your shoulders relaxed, but do not let the High V become too wide: focus on going no lower than 45 degrees from vertical.

Bring the arms down another 90 degrees from the High V so that they make an inverted V. Once again, the hands should be in fists. Keep your shoulders relaxed. Your arms should be slightly closer to your legs than to horizontal. It should also be slightly in front of you, so that you can see your arms stretching out from your shoulders instead of hiding at your sides. You want the Low V to be tight.

Stretch each arm out to its respective side as though you were carrying two buckets on a horizontal line. Your hands should be in fists, as though you had the handles to the buckets in each hand. Do not let the T drop and do not bow your elbows. The line across your body made by your arms should be perfectly horizontal.

From the T, bend each arm at the elbow and bring it to the chest, as though you were about to punch your ribcage. Your hands should be in fists, facing down. Keep the horizontal line intact: the line is just half the size now, starting at the elbows instead of the fists.

Keep one arm in the High V position, so that it is 45 degrees from the vertical. Take the other arm across your body, to the same side at the arm that is half of the High V. Put this arm in the position of a Low V, so that your two arms form a K.

From a Touchdown, bring the arms down in front so that the fists are directed toward the ground. The hands are in fists and the biceps should be at the sides of the rib cage, squeezing to keep the vertical lines straight.

One hand should be placed in a fist on the hip, elbow pointed out. The other hand should be in the position of a Touchdown: fist pointed to the sky and inner elbow touching the side of the head.

Both arms should be extended straight out in from of you with hands in the fist position. The thumb and index finger side of your fist should be facing up, shoulders relaxed with elbows and wrists tight.

Same as Candle Sticks except the top of your hand (while still in fists) are facing up... as if you were holding a bucket of sand.

Remember to use and appropriate prep for jumping and to land with both feet together.

Legs stay together with toes pointed arms in a T position; a timer jump is to get the basic timing for the jump from the approach to the landing.  (8 count)

Arms in a T position with toes pointed and stomach pulling up by lifting knees to chest.  This is a great jump to prep for Pikes.

Looks like a jumping jack in the air.  Toes pointed, thumbs tucked and when arms are above head in a high V.

Each leg should be out to the side, as though you were doing a straddle stretch but in the air. The hips should be rolled back during the jump so that the toes of each foot point back behind the jumper. Keep the legs as straight as possible and as high as possible. The goal is to get your legs to be parallel to the ground, but the legs can also over extend (which is the ultimate goal).

Herky (Left side and Right side)

One leg should be pointed out the side while the other leg is bent as it would be in a cheerleading sit. The line across the legs should be parallel. The straight leg should not go above the parallel line to the ground.

One leg should point out in front of the body, as if you were about to jump over a hurdle. The back leg should be bent with the inner knee facing the ground. Keep the line of the legs as close to parallel with the ground as possible.

Both legs should point straight out in front of the body, either parallel with the ground or at a higher angle. Strong abdominal muscles are necessary to make this jump possible, as it is these muscles will lift the legs during the jump. This is a more advanced jump: it is recommended that Toe Touches, Herkies, and Hurdlers be mastered before attempting this jump