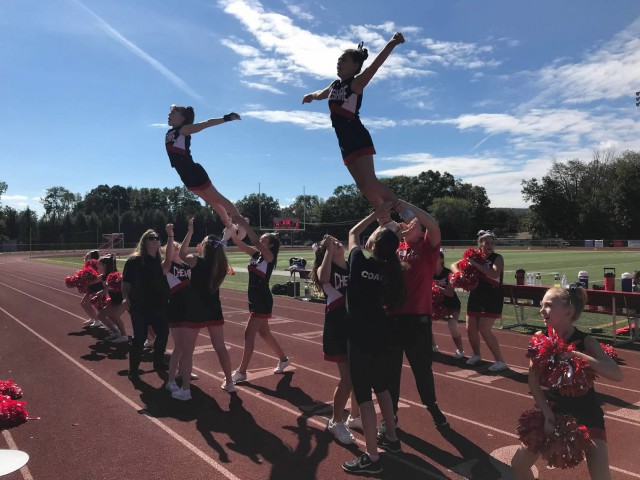 Stunts are defined as building performances displaying a person's skill or dexterity.  Stunts range from basic two-legged stunts to one-legged extended stunts and high flying basket tosses. There are numerous variations of each basic stunt.

A stunt group usually involves up to four bases holding or tossing another cheerleader in the air. Partner stunts have only one base and one flyer, usually accompanied by a spotter.

Pyramids are multiple groups of stunts connected by the flyers. This connection may be made in a variety of ways, from a simple linking of hands to having a multi-level pyramid.

Bases stay on the ground providing the primary support for the flyer during a stunt. Bases will watch the flyer at all times.

The main base applies when doing a one-legged stunt. This main base has the majority of the flyer's foot, and the majority of her weight. The main base will be directly under the stunt until it is cradled or brought down. In a one leg extension stunt, will lift the toe and heel of the foot to increase stability from moving forwards or backwards.

The side base applies when doing a one-legged stunt. The side bases help the main base lift the flyer up into the air. Side bases hands will be placed under and around the middle of the foot to create stability from moving side to side.

The flyer or top is the person that is in the air during a stunt.  This is the person that is commonly the main focus of the stunt. Flyers must stay tight throughout the entire stunt.  The flyer must control their own weight by squeezing everything from their thighs to their shoulders. If they don't stay tight, there is a greater risk of them falling and injuring either themselves or their bases. They must keep a steady focus on what they are doing. Coaches will usually have the flyer look at a wall to help them concentrate on staying tight. Flyers that loose their focus will loose their balance or forget to stay tight.  A strong core and good sense of balance are key qualities to possess when stunting.

This is the person standing behind the stunt. They help dip or jump the flyer into the bases hands.  They do so by using their hands to support the flyer's back end, and then push it up into the air.  Once in the air, they will hold the flyer's ankles, providing support.  When the flyer cradles, they catch her under the flyers arms.  If the flyer falls backwards, it is the back spot's job to catch her preventing any part of the upper body of the flyer from coming into contact with the floor.

This person does not actually touch the stunt unless something goes wrong. The additional spot can stand behind, in front, or beside the stunt.  Arms are either reaching up in the air or by their side.  Additional spots eyes are focused on the stunt at all times even though the stunt is not touched.

“Prep” defines a Stunt in which flyer stands with each foot in the hands of a base at shoulder level. The two bases, facing each other, hold the feet of the upright flyer at collarbone level, so the flyer is standing about shoulder-width apart. The flyer controls every stunt, and can bring the bases closer together or push them farther apart, if desired, by simply moving his or her legs. The back spot holds the calves or ankles of the flyer. A front spot is optional and may be used to secure the stunt by the shins of the flyer.

Cupie is almost identical to the Full Extension except that the flyer's feet are together, in one hand of a single base or with one foot in the hands of two bases.

Flyer stands with each foot in the hands of a base while her arms are in an extended overhead position. The back spot can either hold the ankles of the flyer, or support the wrists of the bases. In a single based stunt, the base will hold both of the flyer's feet above his/her head, with arms locked.

A thigh stand is a beginner level simple stunt. The bases kneel on one leg and have their feet touching each other by the sides of their shoes. The back spot will hold the flyer at the waist. She will dip and jump onto the bases thighs.

All of the variations can be done at prep or extension level.

One or more bases hold up the flyer by the foot and the flyer balances weight on one that straight leg. The flyer's other leg is bent with the foot positioned at about the knee level of the flyer nestling it alongside the standing leg's knee. The name of this stunt is often shortened to 'Lib'.

This is a liberty variation facing the side. One or more base hold up the flyer by the foot and the flyer balances weight on one that straight leg. The flyer then grabs the loose foot and bends that leg upward behind the body until the toes are close to the back of the head, a position resembling a scorpion's tail. The foot is secured in place by the opposite hand. A more advanced variation of the scorpion is the "Chin-chin," where the flyer tucks her foot underneath her own chin.

This is a liberty variation facing the side. One or more bases extend one of the flyer's feet. The flyer's other leg is held by the flyer's hand to the side and the leg is fully extended. A Scale is also called a Skate or Skater in some regions.

While executing a Torch the base group faces forward holding the foot as a side base would. While the flyer is holding a one-legged extended stunt while facing 90 degrees sideways from the base.

Heel Stretch is a variation of a liberty. It is a stunt in which the base/bases holds one foot of the flyer while she holds the other foot in an elevated stretch position with her same hand.

The Bow and Arrow is a variation of a heel stretch. The flyer grabs her foot with the opposite hand. Then she pulls her arm thought and puts it in front of her leg, holding it straight. Or if flyer is not flexible enough to have her hand in front of her leg she can keep it behind, but that's known as an "overstretch"

A Needle is a variation of liberty facing the side. The main difference in a regular scale and a needle is the flyer's position in the air. Where in a normal scale the chest is either parallel or higher than the hip on the supporting leg, a needle scale the chest is down beside the main support leg. Also, the leg that was supported by hands in a regular scale is now "free" and is pointing to near as north or "12 o'clock" as flexibility allows the flyer to obtain. The flyer also maintains balance by holding onto the bases hands and her own ankle. A Needle is sometimes called a spike.

An Arabesque is a variation of liberty facing the side. From a lib, the flyer points their leg out behind them and their arms are in a "T" position.

A hitch is a variation of the prep or extension. One of the side bases turn to face forward and lifts the flyer's foot in an extension; or high enough so that the flyer's knee is bent at a 90 degree angle. So this doesn't leave all of the weight on the other base, the back swiftly moves her hand so that both of her hands are supporting the non-bent leg.